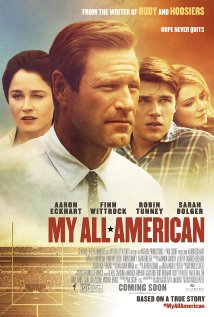 Becky and I went to see the new movie My All American at the AMC Theater in Highlands Ranch, CO on Friday of last week. The IMDb website at My All American. describes the movie as follows…

“Freddie Steinmark, an underdog on the gridiron, faces the toughest challenge of his life after leading his team to a championship season…”

The Review:  We went to see this movie with our friends Mark and Maria and Mark was complaining that he wanted to go and see the new James Bond flick, which I had already seen twice.  I have to write a review about that movie as well.  This movie My All American was one of those films where I had no idea what to expect.  Becky and I only found out that the guy was from Colorado as we were walking into the movie and Mark told us that the guy was from Westminster.

The film opens up with the coach of the Texas football team being asked about some of his All American’s and he talks about this guy Freddie Steinmark, which doesn’t make any sense to the person doing the interview.  The main character Freddie is in High School as his story begins.  He’s a big time jock, who’s whole life centers around football.  He’s a total planner who has planned his whole life out and even the girl he is going to marry.  The kid was driven!  He ends up getting denied by various schools because of his size as a football player, but lands at Texas playing for the Longhorns.  His story really starts to take off once he is playing for a team that could become National Champions.

This movie has a ton of heart.  It is a tear jerker, which I didn’t expect it to be at all and the story of Freddie Steinmark is pretty amazing.  We all really liked this movie and we highly recommend it.  It was a great flick and I am surprised that it is not getting better reviews because it’s a very good movie.  Definitely put this one on your list, even if you’re not a football fan.