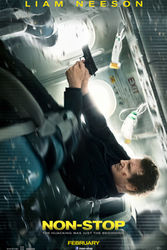 Becky and I went to see Non-Stop at the AMC Theaters in Castle Rock, CO last week. The Fandango website at Non-Stop describes the movie as follows…

“Global action star Liam Neeson stars in “Non-Stop,” a suspense thriller played out at 40,000 feet in the air. During a transatlantic flight from New York City to London, U.S. Air Marshal Bill Marks (Neeson) receives a series of cryptic text messages demanding that he instruct the airline to transfer $150 million into an off-shore account. Until he secures the money, a passenger on his flight will be killed every 20 minutes. The film reunites Neeson with “Unknown” director Jaume Collet-Serra and producer Joel Silver, and co-stars Golden Globe Award winner Julianne Moore.”

The Review: We went into seeing this movie with really low expectations.  We figured that Non-Stop would be on the same level as The Gray, which was the last terrible Liam Neeson movie that we saw together.  We often joke about that movie by saying, “Stare back at them.” which is what Neeson’s character would tell everyone from a pack of wild wolves surrounded them.  It was a very cheesy movie to say the least and we expected the same from this movie.

The idea of a airplane being taken over after 9/11 seems possible, but probably not plausible given the tight amount of security.  In this movie the plane is hi-jacked by terrorists who want to recreate the fears of 9/11 once again.  Unfortunately, the film is politically charged with Hollywood make believe that takes away from the film.  The terrorists are not Muslim radicals as most Americans would expect, since that’s who took down the World Trade Centers on 9/11.  The characters in this film are the least likely to perform an act of terror on Americans, but Hollywood likes to pretend as though reality is really myth and myth is reality.  One of the characters on the plane is an Arab and he’s one of the hero’s in the movie, which was clearly the Director and writers trying to get a message out to the audience.

In spite of it’s shortcomings and political overtones, the movie was better than we expected.  The story was pretty good and the characters and acting were well done.  The movie has several plot twists and quite a bit of action and excitement. It’s predictable over all since you know that the plane is being hijacked.  We liked the movie.  It’s not fantastic, but it was entertaining.  We thought it was worth the trip and it will be a good rental when it comes out.