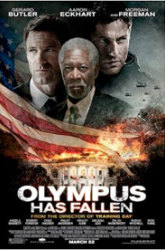 Becky and I went to see Olympus Has Fallen back on Opening Day a few weeks ago at the AMC Theater in Highlands Ranch, CO with our friends Mark and Maria. The MovieFone website at Olympus Has Fallen describes the movie as follows…

“When the White House (Secret Service Code: “Olympus”) is captured by a terrorist mastermind and the President is kidnapped, disgraced former Presidential guard Mike Banning finds himself trapped within the building…”

The Review:  Olympus Has Fallen is the first of several movies where the White House is under attack and a “super hero” type character has to come in and “save the President”.  I figured this movie would be very predictable and I was right, but it was more entertaining than I expected.  The body count is ridiculous!  The story is pretty good since Gerard Butler does a good job playing the character Mike Banning, which is the main character in the film.

Unfortunately, the movie is way too far fetched to be even remotely believable.  There were so many things that had to take place in order for the story to be close to possible that it took away from the shock value of the film.  The President for example tells his underlings to give the Nuclear Launch Codes to the terrorists to save their lives, which would never happen, even under President Obama.  Morgan Freeman was just kind of hanging out in this  movie.  I couldn’t figure out what he was doing there other than drinking coffee and showing up for his star power.  When he gets his honorary award someday at The Academy Awards, it will be one more movie that he was in ordering a cup of coffee.

There are a number of things that took place in the film that made you think you were watching an action film from the early 1990’s.  Nevertheless, it was still rather entertaining.  We didn’t dislike the movie, but we didn’t think it was worth seeing on the big screen since it was far fetched and too predictable.

We would have to say this one is a good rental for a snow day, when you’re really bored.