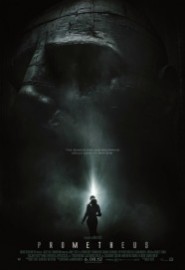 Becky and I went to see the new movie Prometheus on Friday at the AMC Theater in Castle Rock, CO.  The Moviefone website at Prometheus describes the movie as follows…

“Ridley Scott, director of ‘Alien’ and ‘Blade Runner,’ returns to the genre he helped define. With ‘Prometheus,’ he creates a groundbreaking mythology, in which a team of explorers discover a clue to the origins of mankind on Earth, leading them on a thrilling journey to the darkest corners of the universe. There, they must fight a terrifying battle to save the future of the human race...”

The Review
Prometheus is a classic Sci-Fi horror flick that is much like the original film Alien, but not nearly as good as the original.  I had no idea that it was a prequel to the movie Alien by Ridley Scott until the very end of the movie.  The story is pretty good, in that you have a bunch of scientists looking for the “creator” of the human race based on cave dwelling paintings and they set out to find their origin.  The story is good because you could definitely see scientists doing this in their religious zeal to prove the history of mankind.

Once they reach the planet, the team discovers that their hopes are dashed because the advanced alien species they have come to admire has created biological weapons that has destroyed the the planet they are visiting and created a new deadly mutant life form.  It gets pretty nuts from there and is very much like the original Alien movie, almost more like a remake in some ways than a prequel.

Becky absolutely hated this film, but she doesn’t like Sci-Fi movies anyway, so that was not a surprise.  She probably would have left the movie though, she disliked it that much.  I on the other hand liked it.  I liked the original Alien movie though and this was quite a bit like it.  It’s not a great flick, but it’s pretty good.  I rated it Worth The Trip, if you like the Alien series, but if you didn’t you should take Becky’s advice on this one.