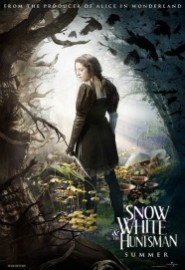 “In the epic action-adventure ‘Snow White and the Huntsman,’ Kristen Stewart (‘Twilight’) plays the only person in the land fairer than the evil queen (Oscar winner Charlize Theron) who is out to destroy her. But what the wicked ruler never imagined is that the one girl threatening her reign has been training in the art of war with a huntsman (Chris Hemsworth, ‘Thor’) who was dispatched to kill her. Sam Claflin (‘Pirates of the Caribbean: On Stranger Tides’) joins the cast as the prince long enchanted by Snow White’s beauty and power…”

The Review
Snow White And The Huntsman is a new adaptation of the famous story Snow White by the Brother’s Grimm.  It stars Charlize Theron as the evil dark queen and Kristen Stewart as Snow White, along with the Huntsman played by the guy from the movie Thor.  This rendition has a few twists from previous stories, like the famous Walt Disney cartoon, but it’s very well done.

The movie has plenty of action and suspense.  Charlize Theron is awesome in this movie as the evil queen and all the acting is well done.  It has a little bit of that Lord of the Rings element with fairies, trolls, dwarves and strange forest creatures.  The story though is a classic, complete with the magic mirror on the wall, but the way the queen maintains her youth is with serious dark magic and murder.

I don’t want to spoil this movie, but it’s really good and very well done.  We all liked it.