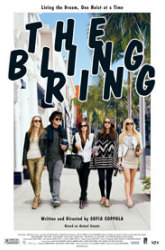 Becky and I went to see The Bling Ring yesterday at the AMC Theater in Castle Rock, CO. The MovieFone website at The Bling Ring describes the movie as follows…

”In the fame-obsessed world of Los Angeles, a group of teenagers take us on a thrilling and disturbing crime-spree in the Hollywood hills. Based on true events, the group, who were fixated on the glamorous life, tracked their celebrity targets online, and stole more than 3 million in luxury goods from their homes. Their victims included Paris Hilton, Orlando Bloom, and Rachel Bilson, and the gang became known in the media as “The Bling Ring…”

The Review:  The Bling Ring is a very strange film that is based on a true story about a group of young people who thought it would be cool to break into celebrity homes and steal their stuff.  The movie sucks you in since you really can’t believe what you’re watching, as these criminals try to figure out when their targets won’t be home and then they can go into their homes and rob them.  The crazy thing is how they got away with it.

The movie is not great, but it’s fascinating because we couldn’t believe how stupid these people were and the amount of risks they were willing to take in order to obtain fancy stuff.  They were not even concerned about getting caught, believing they wouldn’t be found out.  They even wore items they stole and posted their photos on Facebook.  The movie is nuts because these people were crazy.  They broke into the home of Paris Hilton five times, along with numerous other celebrities.

It’s a good movie because it’s interesting, but it isn’t great.  The people are so strange that it’s a bit like watching a movie about people who need serious therapy.  In some ways it’s like a reality show, which is probably why we liked it.  I don’t think it was worth the price of admission, but it does make for a good rental.