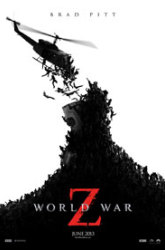 Becky and I went to see World War Z on Sunday at the Regal Cinemas in Lone Tree, CO. The MovieFone website at World War Z describes the movie as follows…

”Max Brooks’ epic tome of a fictional time of global war against the undead is brought to life in this Paramount Pictures/Plan B production. Quantum of Solace’s Marc Forster directs from a script by Changeling scribe J. Michael Straczynski along with the writing team of Matthew Michael Carnahan, Damon Lindelof, and Drew Goddard. Brad Pitt stars as a journalist covering the disaster, with Mireille Enos, Anthony Mackie, and Bryan Cranston heading up the rest of the cast…”

The Review: World War Z is a zombie movie about the coming destruction of mankind from a runaway virus that is unleashed on the planet.  I thought this movie was going to really suck and I wasn’t very interested in seeing it, even though Brad Pitt usually picks pretty good roles in films.  The movie trailers didn’t do this film any favors and they probably should have just showed the title and not showed any of the film since it looked like a ridiculous zombie movie.

This movie rocked!  I really liked it, Becky liked it even Bianca and her friend liked it.  The boys didn’t go see it with us since Conroy was out of town and Corban thought it looked stupid, but he missed out on this film.  It doesn’t take a long time to get into the film, almost immediately, you’re into the zombies being unleashed on the planet and Brad Pitts character and his family are running for their lives.  You never do find out what really caused the virus that infects the population, but it’s a bit like Jurassic Park and Aliens where you really don’t care.  It’s a well done horror film where there isn’t a bunch of blood and guts, but people running for their lives being chased by creatures that are trying to bite them and in a situation that is completely out of their control.

I liked that it was realistic, showing that “Mother Nature” is a beast that you don’t want to mess with and how as a society we may unleash something that we can’t control.  God has clearly put controls into nature for our benefit, but if you mess with them, you may unleash Hell on Earth, such as the disappearance of the honey bee for example.  The movie didn’t pull any punches either.  It showed how people will act in desperate situations and that if you’re not useful to the Government in times of crisis than you and your family are expendable.

If you are in the mood for a scary movie with a good story then go and check out World War Z.