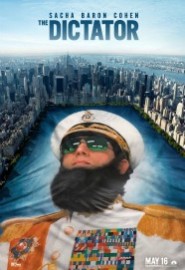 Becky and I went to see The Dictator last week at the AMC Theater in Castle Rock, CO.  The Moviefone website at The Dictator describes the movie as follows…

“Comic Sacha Baron Cohen re-teams with director Larry Charles (Borat, Bruno) for this satirical tale of an oppressive, democracy-hating dictator and a goatherder (both played by Cohen) whose misadventures in America lead to a series of outrageous culture clashes. Anna Faris, Ben Kingsley, and Curb Your Enthusiasm’s J.B. Smoove co-star…”

The Review
The Dictator is a film that could have been really funny, if the guy who did the movie had any talent.  All I can figure is that he has friends in Hollywood throwing him money to make lame movies like this one.

This movie is done by the same guy who did Borat and we should have skipped this one too.  This film was raunchy, childish, ridiculous and stupid.  Do you need more adjectives to describe this movie?

Let me put it to you this way.  Jeff Foxworthy could create a whole new line of jokes describing people who like this movie.  “If you think that raccoon’s are a vegetable, you will probably like The Dictator”, “If you think that the movie Mega Shark vs Giant Octopus should have won an Academy Award for Best Picture, you will probably like The Dictator.”  You get the picture?

This movie was terrible.  It’s quite possibly the worst movie we’ve seen this year – for now.  I’ve heard better jokes from our kids when they were in Elementary school than this movie had and they weren’t disgusting.  It’s getting a Don’t Bother from us.