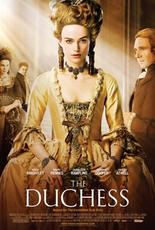 Becky and I went to see The Duchess last night at the Landmark Theater, in Greenwood Village, CO. The Fandango movie website at The Duchess describes the movie as follows:

“Long before the concept existed, the Duchess of Devonshire, Georgiana Spencer (Keira Knightley), was the original It Girl. Like her direct descendant Princess Diana, she was ravishing, glamorous and adored by an entire country. Determined to be a player in the wider affairs of the world, she proved that she could out-gamble, out-drink and outwit most of the aristocratic men who surrounded her. She helped usher in sweeping changes to England as a leader of the forward-thinking Whig Party.”

The Review
The Duchess is a well done film with wonderful cinematography and extraordinary costumes. The acting is great and the story is fascinating, but incredibly odd. Almost too odd to enjoy it as much as you might expect for an all-star cast and being based on a true story.

According to this film, the Duchess of Devonshire, Georgiana Spencer (Keira Knightley), was supposedly this strong willed, beautiful woman who had no ability to persuade her husband from allowing another woman, a friend of hers of all people, to move in and take him from her. Her husband, the Duke of Devonshire (Ralph Fiennes) was a total womanizer, until he got together with her friend and I think that was what was so disturbing about this movie.

Maybe it was more realistic than we wanted to believe when you see how many Hollywood actors leave their beautiful wives for other women. I’m sure you can think of a few and that’s what this goofy Duke of Devonshire was like, a total moron when it came to relationships.

The Duchess was a good film, but not a great film. It was pretty depressing watching this woman get treated by her husband like a dog or a piece of personal property. It just didn’t do it for us, even with the great acting. We would recommend waiting for the rental on this one.

Winnie the Pooh: A Valentine for You movie