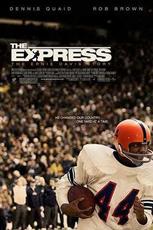 Becky and I went to see the new movie The Express yesterday at the theaters, in Dillon, CO. The Fandango movie website at The Express describes the movie as follows:

“Born into poverty, Ernie Davis (Rob Brown) overcomes many obstacles to get into Syracuse University’s football program. Under the guidance of Coach Ben Schwartzwalder (Dennis Quaid), Davis becomes one of the school’s best players, even surpassing Jim Brown’s achievements. In 1961 Davis becomes the first black player to win the Heisman Trophy, but there is one more obstacle in his life that he must overcome.”

The Review
The Express is an incredible film that I thought should have done much better at the box office than it did for it’s opening weekend. Dennis Quaid was really great in this movie, and so was Rob Brown with the only complaint that Quaid’s character took God’s name in vain, which was offensive and unnecessary. Beyond the language, this movie is both inspiring and an amazing true story about Ernie Davis and the challenges he faced at a time when our country was divided by race and there were few opportunities for people of color.

We took Bianca and Corban to see this movie and although it’s rated PG-13 we were glad that we did. We talked about the movie on the way back to the hotel we were staying at in Breckenridge. Bianca who is only seven commented, “Dad, they really wouldn’t let Ernie into that hotel because of the color of his skin?” I said, “Yes, that’s what they used to do.” and without hesitation she said, “Well, that’s stupid!”. It’s amazing that a seven year old can figure that out, but that millions of Americans tolerated that kind of injustice for so many years. Corban had a similar response to Bianca, although he was really ticked that they swore in the movie so much and especially took God’s name in vain. He said, “I would have rated it as a Don’t Miss It, but now I’m only giving it a Worth The Trip because I didn’t like the swearing”.

There’s a great line in the film where a white guy on the Texas football team condemns a lineman on the Syracuse team for sticking up for Ernie and tells him that he’s not being a good Christian. The other guy replies, “I’m Jewish.”, which was really quite funny. Unfortunately, if Christians who are prejudice actually read their Bible they would know that God condemns behavior that discriminates against another human being based on race. President Abraham Lincoln understood this and it cost him his life.

This is a very powerful movie and we all really enjoyed it and thought it was definitely worth the price of admission. If you’re looking for a really good movie to take your family to that shows the hardships of American’s and what can happen when people persevere and beat the odds, you will enjoy this movie.

John is an auto consultant with JFR & Associates in Denver, Colorado. He can help you save time and money on any make or model, new or used, lease or purchase – nationwide! Call or email John about your next vehicle! jboyd@coolcarguy.com We’re No Angels dvdrip Winnie the Pooh: A Valentine for You ipod