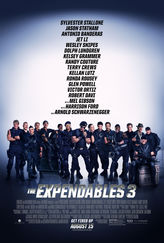 Becky and I took Bianca to go see Expendables 3 today at the AMC theaters in Castle Rock, CO.  The Fandango website at Expendables 3 describes the movie as follows…

“Barney Ross (Sylvester Stallone) and his band of aging mercenaries recruit a younger crew to battle the one man capable of exterminating the Expendables in this sequel directed by Red Hill’s Patrick Hughes. When Barney and Conrad Stonebanks (Mel Gibson) co-founded the Expendables, they were positively unstoppable. Years later, Stonebanks abandoned the team to become a cutthroat arms dealer, and Barney was forced to kill the man he once called a brother….“

The Review:  After running the ADT Marathon today with Becky and our friend Mark, it was easy to talk Becky into going and sitting in a movie.  Bianca came along and the only movie we hadn’t seen was Expendables 3, so we decided to go and see it.  First it was just over 2 hours long and as Bianca said, “It felt like it was 4 hours long.”.  We had low expectations going into this movie and it met or exceeded our expectations.  It was terrible.  I’m glad I missed the first two versions of this film, which seemed like something that was thrown together with a bunch of old action hero’s to get a paycheck at the expense of the audience.  Sorry, but we tried to watch it and enjoy it, but it is painful to watch.  It’s on the same level as watching professional wrestling.

This movie is really bad.  They try to make it serious, but it shouldn’t be called The Expendables, but The Invincibles as these ten old guys take on an entire army.  It was less believable than the Rambo series or any of Sylvester Stalone movies.  Most super hero movies are more believable than this movie.  This film might be a good rental, but Becky and Bianca totally hated it.  I thought it was pretty lame and I’ll give it a cheesy rental rating.