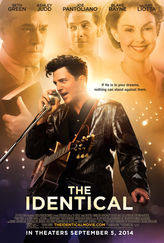 Becky and I went to see The Identical on Friday at the AMC theaters in Castle Rock, CO.  The Fandango website at The Identical describes the movie as follows…

“One man’s passion for music leads him to question his faith and his identity following a shocking revelation about the family past in this musical drama set in the 1950, just as rock ‘n’ roll began to dominate the airwaves. All Ryan Wade (Blake Rayne) ever wanted was to make music. Ryan’s dreams of performing on the stage before thousands of screaming fans are seemingly dashed, however, when his preacher father (Ray Liotta) and devout mother (Ashley Judd) pressure him to join the ministry. Later, with the support of his wife (Erin Cottrell), his best friend (Seth Green), and his manager (Joe Pantoliano), Ryan finds fame as “The Identical” a rock ‘n’ roll singer who looks and sounds just like the legendary Drexel Hemsley…”

The Review:  I was not exceed about seeing this movie on Friday.  It sounded pretty stupid to me when Becky told me it was about a rock and roll singer and another guy who sang songs as an impersonator.  The movie has Blake Rayne, who I had never seen in a starring role before, along with Ray Liotta and Ashley Judd.  It has a Christian element to it as Ray Liotta plays the main character’s father who is an old school preacher and he played the part extremely well.  I have to say that I think this is one of the best roles I’ve seen Ray play in a long time and he was really good in this movie.  Usually, Liotta plays a bad guy, but this character has heart and so does the movie.

The story is really good, the music is good too and it has a feel like it is a true story.  If there is one complaint, the main character was a bit too much like Johnny Cash or Elvis.   It probably could be a true story the way the script was written and I think that is what made it entertaining to watch.  I don’t want to give away too much of the film, but it is a really good Drama that we both liked.  It’s a very clean cut movie too without any foul language and was very well done.  We both liked it and thought it was worth the price of admission.  It’s more of an adult film about relationships and the choices that we make in life and how our choices can affect the lives of others and following our passions.