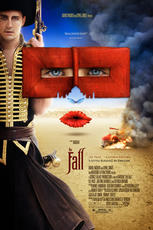 Becky and I went to see The Fall last week at The Landmark Theater in Denver off of Belleview and Orchard road. The Fandango website at The Fall describes the movie as follows:

“Languishing in a hospital, Roy Walker (Lee Pace) is a broken man in more ways than one: Unable to walk after a fall from a horse in a movie stunt gone wrong, his heart is also broken after his girlfriend ran off with the movie’s leading man. Ready to end his life, Roy befriends five-year-old fellow patient Alexandria (Catinca Untaru), with the goal of persuading her to stealing a fatal dose of morphine pills for him.”

The Review
should definitely win the Oscar this year for the best cinematography. The locations where this movie was filmed and the way the video elements within the story were all put together is nothing short of stunning. It’s extremely graphically stimulating and was amazing.

The Fall is a mixed bag. You will probably either really like this movie or totally hate it. Part of the problem is that The Fall is a bit like The Wizard of Oz. It has the young girl who is like Dorothy only in this case she is listening to a story being told by a man who wants to commit suicide. There is the evil Warlord, much like the Witch in the Wizard of Oz. And like the Wizard of Oz, the girl is imagining people she knows and putting them into the story as characters. There are four characters in this film, but much like the Cowardly Lion, Scarecrow, the Tin Man and The Wizard who Dorothy knew outside her dream, but the problem is that The Fall is not a kids film, instead it is extremely violent.

Becky didn’t like it as much as I did, but she liked it enough to recommend it. I got past the violence of the film and really enjoyed the story and the way it was put together. There is a story within the story and the fact that I haven’t seen a movie that dealt with the challenges facing Hollywood stunt men in the early days of movies was interesting as well. As a fantasy film it was really different and enjoyable. There are parts of the film that are disturbing, but I really thought this was an original and well done movie, especially for an Independent film.

The Man Between move