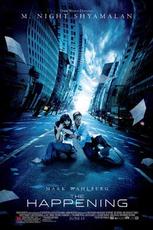 Becky and I went to see The Happening with our friends Rod & Kimberly Tactaquin on Friday at the AMC theaters in Highlands Ranch. The Fandango website at The Happening The 007 World Is Not Enough psp describes the movie as follows:

“It begins with no clear warning. In a matter of minutes, episodes of strange, chilling deaths erupt in major American cities. For Philadelphia high school science teacher Elliot Moore (Mark Wahlberg) what matters most is finding a way to escape the mysterious and deadly phenomenon. Though he and his wife Alma (Zooey Deschanel) are in the midst of a marital crisis, they hit the road, first by train, then by car, with Elliot’s math teacher friend Julian (John Leguizamo) and his 8 year-old daughter Jess (Ashlyn Sanchez), heading for the Pennsylvania farmlands where they hope they’ll be out of reach of the grisly, ever-growing attacks. Yet it soon becomes clear that no one – and nowhere – is safe. This terrifying, invisible killer cannot be outrun. It is only when Elliot begins to discover the true nature of what is lurking out there that he discovers a sliver of hope that his fragile family might be able to escape what is happening.”

The Review
was not happening. This was one of those movies where the Previews were better than the film. Unfortunately, Mark Wahlberg couldn’t save The Happening no matter how hard he tried. I must say that he was really good in the movie, but this movie was just plain stupid.

As Rod put it after the movie, “M. Night Shyamalan attempted to create a movie about going green and he created something that will make you nauseous”. This movie is so goofy, it’s a similar premise to that cheesy 1970’s film, Attack of the Killer Tomatoes, only it’s serious and not funny. The idea is that the trees and grass are evolving to communicate with one another to kill people who are destroying the planet. How do they do it? They release a toxin in the air that makes you want to kill yourself. You immediately lose your mind and throw yourself off a building or walk into a den of lions and let the animals pull you apart or you start a lawn mower and lie down in front of it. Yes, it’s really that pathetic.

Not one of us liked this movie, neither did most of the people in the theater, although we heard a couple goofballs cheer at the end of the film. Maybe they were cheering because it was over? We can’t imagine any other reason.