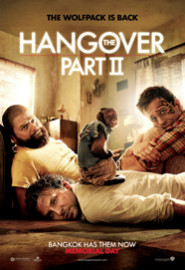 Becky and I went to see the new The Hangover 2 movie at the AMC Theater in Castle Rock, CO on Friday.  The MovieFone website at The Hangover 2 describes the movie as follows:

“In the follow-up to the record-breaking hit comedy ‘The Hangover,’ Phil (Bradley Cooper), Stu (Ed Helms), Alan (Zach Galifianakis) and Doug (Justin Bartha) travel to exotic Thailand for Stu’s wedding. After the unforgettable bachelor party in Las Vegas, Stu is taking no chances and has opted for a safe, subdued pre-wedding brunch. However, things don’t always go as planned. What happens in Vegas may stay in Vegas, but what happens in Bangkok can’t even be imagined.“

The Review
The Hangover 2 is the sequel to the hit comedy The Hangover with a whole new installment of “The Wolf Pack”.  In this story, the three guys find themselves in an almost identical situation to the first one, only one of the other characters is getting married in Thailand to his dream girl.

This movie is over-the-top and totally crazy.  The story is very similar to the first one, which is one of the reasons why the critics didn’t like it.  However, it’s very funny.  It’s very crude and disturbing at times, but you can’t help but laugh at these three idiots as they get themselves into more mischief and mayhem.

This is one of those movies where you hate to admit to people that you liked it because it’s totally wrong on so many levels.  It shows how insane people can be at times when they are not in their right minds, but it is pretty far fetched as well.  If you liked the first Hangover movie you should like this one, but it’s definitely way more wild than the first one, which I didn’t think would be possible.

If your teenagers watched the first film, you’re going to definitely want to watch this movie before you let them watch this one.