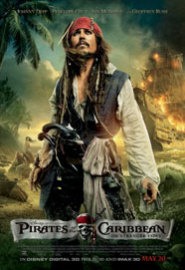 “Produced by Jerry Bruckheimer and directed by Rob Marshall, ‘Pirates of the Caribbean: On Stranger Tides’ captures the fun, adventure and humor that ignited the hit franchise–this time in Disney Digital 3D.“

The Review
Pirates of the Caribbean: On Stranger Tides is the latest installment of the Johnny Depp, Pirates of the Caribbean movies.  New characters are introduced and a new storyline with the infamous Black Beard the pirate and Penélope Cruz as they go in search of the Fountain of Youth.  A few of the other characters from the former movies appear in this film, but not some of the former main characters.

This is a fun movie, if you’re a fan of the Pirates of the Caribbean movies.  I think Johnny Depp is fantastic in all of these films and his character is a riot.  If you haven’t seen these movies you may not like this movie since it’s a continuation of the Captain Jack Sparrow story.  There are some strange characters in this movie too, such as wild Mermaids, zombies and deadly pirates.

I liked this movie much better than Becky did, but it was pretty predictable, which took away from it quite a bit. Our kids really liked it and all thought it was a Don’t Miss It.  It’s doing really well at the box office even though most of the critics didn’t like it.