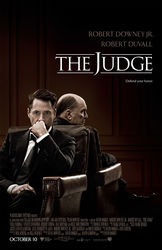 Becky and I went to see the film The Judge on Friday at the AMC theaters in Castle Rock, CO.  The Fandango website at The Judge describes the movie as follows…

“Robert Downey Jr. plays an urban lawyer who heads back to his rural home when his father, a judge, is implicated as a murder suspect in this comedy-drama from Warner Bros. Vera Farmiga, Robert Duvall, Vincent D’Onofrio, and Billy Bob Thornton head up the rest of the starring cast…”

The Review: The Judge is a drama about a powerful big city lawyer and his Dad who is a local Judge in a small town.  They have had relationship challenges most of their lives and the son finds himself in a position having to defend his father from going to jail.  It creates some interesting conflicts between the family and the characters.

The movie is very well done and Robert Duvall was amazing, along with the other actors.  Many people who see this film will be able to relate to the characters in this film and how one or two conflicts in the past and un-forgiveness can have lasting impacts on family dynamics.  There are also some health issues that come into play for the main character that is pretty sad and rather graphic.