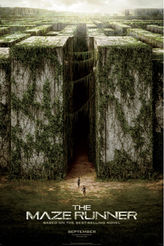 Becky and I went to see the film Maze Runner on Friday at the AMC theaters in Castle Rock, CO.  The Fandango website at The Maze Runner describes the movie as follows…

“Based on the bestselling novel by James Dashner, this adventure thriller for young adults follows a young boy named Thomas (Dylan O’Brien) who finds himself trapped within a giant, deadly maze with a group of other kids. While he has no memories of his life prior to being in the maze, he is plagued by nightmares about a shadowy organization known only as W.C.K.D., and hopes that these fragments of dreams will help him discover the secrets of his past and a way to escape..”

The Review:  This was a strange science fiction film about a young man who wakes up in a maze and has to get out of the maze with a group of other people who are being picked off by monsters.  The story is pretty good and the acting is good, but the ending kind of bothered all of us, since it could have been much better.  There is quite a bit of senseless killing in the movie, but for the content you would expect that I guess.  It has a little bit of a horror, suspense element to it and it is hard to figure out what is going on for quite a while because of the way the film is handled.  You’re not really sure why they are in this maze and there are flashbacks by the hero of the film to before he gets into the maze.

This wasn’t a great movie, but it wasn’t terrible.  I think it was worth the price of admission and Becky thought it was more of a rental.  I think I liked it because of the science fiction element to it.