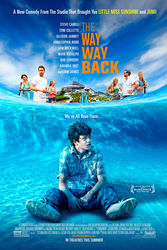 ”THE WAY, WAY BACK is the funny and poignant coming of age story of 14-year-old Duncan’s (Liam James) summer vacation with his mother, Pam (Toni Collette), her overbearing boyfriend, Trent (Steve Carell), and his daughter, Steph (Zoe Levin). Having a rough time fitting in, the introverted Duncan finds an unexpected friend in gregarious Owen (Sam Rockwell), manager of the Water Wizz water park. Through his funny, clandestine friendship with Owen, Duncan slowly opens up to and begins to finally find his place in the world – all during a summer he will never forget…”

The Review:  The Way, Way Back is one of those movies that are just fun to watch.  It’s a bit like The Sandlot, where the characters are a bit over-the-top and their personalities will suck you into the movie.  The opening scene with Steve Carell is very funny.  He plays a real jerk in this film, which he does surprisingly well.  Steve’s character Trent is the boyfriend of the main character’s recently divorced Mom, who thinks he’s really something and he and the teenager have nothing in common.

The characters in this movie are really good and the story is very entertaining.  I don’t want to tell too much about the film, other than what the Fandango description tells about it, but this movie was done extremely well.  The dialogue in the movie is really done well, with no big special effects, just great acting and a fantastic script.  You can’t help to like this kid and his buddies at the Water Wizz water park.  They are really fun to watch.  This film probably isn’t going to win any awards, but it’s a really good movie that was definitely worth the price of admission.

We went with our friends Mark and Maria and we all really liked this movie.  Becky and I could definitely see this one again when it comes out on the rental market, it’s very funny.  We’re giving it a Don’t Miss It.