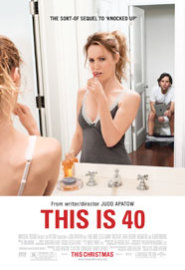 Becky and I went to see the new flick This Is 40 last night at the AMC theaters in Castle Rock, CO with our friends Chris & Hope.  The MovieFone website at This Is 40 describes the movie as follows…

“Five years after writer/director Judd Apatow introduced us to Pete and Debbie in ‘Knocked Up’, Paul Rudd and Leslie Mann reprise their roles as a husband and wife both approaching a milestone meltdown in ‘This Is 40’, an unfiltered, comedic look inside the life of an American family.

After years of marriage, Pete lives in a house of all females: wife Debbie and their two daughters, eight-year-old Charlotte (Iris Apatow) and 13-year-old Sadie (Maude Apatow). As he struggles to keep his record label afloat, he and Debbie must figure out how to forgive, forget and enjoy the rest of their lives…before they kill each other…”

The Review: This Is 40 is almost like a sequel to the movie Knocked Up, which I liked better than this movie, but this film is funny.  If you have children and are over forty, you will find something you can relate to in this film.  There are some very funny parts of this movie, but they gave away far too may of the laughs in the Previews.

The story is very well done since it deals with the struggles of a family trying to juggle their relationship with work, exercise, children and each other.  Where the movie falls down in my opinion is that it’s over-the-top with the language and adult situations, which at times are funny, but also disturbing.  The teenager cusses out her Mom for example and the language is crazy.

At other times, it was a little too predictable for me.  The characters and acting is very well done though and I thought it was a borderline between a Rental and being Worth The Trip.  The language and situations were just a little too much for me, so I’m going with a Rental.  This is not a Rated R film that you want to let your teenagers see, so be forewarned.  Becky thought it was Worth The Trip, which surprised me since she tends to me more conservative than me.

Hope and Chris said after the movie that it was “Okay”.