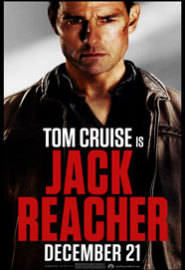 Becky and I went to see the new Tom Cruise flick Jack Reacher at the AMC theaters in Highlands Ranch, CO on the Friday night with our friends Mark & Maria and our son Conroy.  The MovieFone website at Jack Reacher describes the movie as follows…

The Review: Jack Reacher is one of those films that had a pretty good movie trailer with cool music and what looked like an interesting story.  We thought it would be a really good flick.  Unfortunately, it didn’t deliver and was a boring film.

The story wasn’t terrible, but it moved way too slow and was a bit too much like Tom Cruise was playing a modern day Sherlock Holmes trying to solve a murder mystery, rather than an action flick.  Tom Cruise is not very good at playing this kind of a crime detective character.  I’m sure the Jack Reacher books are much better than this movie.  I have to go with most of the critics on this one, that it’s not not worth the price of admission.

Robert Duvall was probably the best and most believable character in this movie.  He played the owner of a shooting range that the accused killer was doing his target practice at, before killing five random people.  Unfortunately, this movie still had the feel of a 1990’s action film and neither Robert nor Tom could save it.

Conroy really didn’t like this movie and rated it a Don’t Bother.  I didn’t think it was terrible and thought it was a Rental and Becky felt the same.