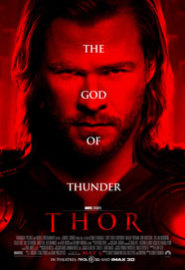 Becky and I went to see the new comic book super hero movie THOR this past weekend with the kids.  The MovieFone website at THOR describes the movie as follows:

“Exiled to Earth after his arrogance fans the flames of an ancient conflict, The Mighty Thor (Chris Hemsworth) of Asgard discovers the meaning of humility when a powerful old foe dispatches a destructive force to crush humanity. Only when the banished prince has defeated an opponent capable of crushing him in battle will he learn what it takes to be a true leader. Anthony Hopkins, Natalie Portman, Stellan Skarsgård, and Tadanobu Asano co-star in a comic-book adventure from acclaimed director Kenneth Branagh. – Jason Buchanan, Rovi…”

The Review
THOR is a another super hero thrill ride with more star power than previous comic book films. This flick has Natalie Portman, Anthony Hopkins and this new soon to be heartthrob Chris Hensworth.  There have been a ton of comic book movies over the years, from the X-Men to Batman to IronMan.  This one delivers like all the rest with plenty of special effects, a pretty cool story and good character development.

Rather than being true “gods” as in the ancient Norse writings about Thor, God of Thunder and Odin his father, the film makes them more like space aliens who live in a galaxy far, far away that have more advanced technology than we humans.  It’s an interesting twist and one of the things that I have always found fascinating is that in Norse mythology you have Thor who yields his hammer and creates thunder, while in Greek mythology there is Zeus who yields a lightning bolt and controls the storms as well.  In this film Thor has his hammer that has been forged in a Sun giving him tremendous power.  Once he is cast to Earth, which again is interesting in light of Satan and other angelic beings that have been cast down to Earth in the Bible, he loses his power and must become worthy to get his hammer back.

Becky and I both liked it, but I think I liked it and so did the kids.  We all thought it was worth the price of admission, if you like fantasy movies and super hero’s. If you don’t, you’ll want to skip this one because you definitely won’t like it unless you like this genre.