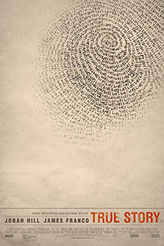 We went to see the new movie True Story this past weekend at the AMC theater in Highlands Ranch, CO with Conroy, Corban and Bianca. The Fandango website at True Story describes the movie as follows…

“This psychological thriller, based on true events, tells the story of a disgraced journalist (Jonah Hill) who’s drawn into a cat-and-mouse game with an accused murderer (James Franco) who has assumed the journalists’ identity…”

The Review: We didn’t know what to expect going into this movie that is based on a true story.  The story was pretty amazing and really focused on two people, a murderer and a journalist.  I don’t want to give away the movie.  It moves very slow and methodical, with a great deal of interaction between the two main characters.  The murderer is really a sick and diabolical madman, who wants to take over the identify of the journalist and the journalist wants to be famous.

The acting in this film was great and the story was fascinating and yet disturbing, especially for the crimes he committed. It was very well done and you may either find it very good like I did or boring like Becky and Corban did.  Conroy, Bianca and I really liked it and we were happy for the outcome.  What I found most interesting about this movie was the very ending where the journalist lost his identity and the murderer assumed his identity.