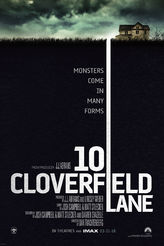 “Following a car accident, Michelle (Mary Elizabeth Winstead) awakens in the basement fallout shelter of a conspiracy-crazed man (John Goodman) who claims to have saved her from the wreckage of the crash. He also informs her that a chemical attack has devastated the surrounding area, rendering the outside world uninhabitable…”

The Review:  10 Cloverfield Lane was a movie that we really didn’t know what to expect.  It was Produced by J.J. Abrams and it is a movie that is extremely suspenseful similar to an Alfred Hitchcock film.  It doesn’t take long for the film to start creating suspense.  The main character who is a young woman, played by Mary Elizabeth Winstead, finds herself in the basement of a man who seems like he is crazy, played by John Goodman.  You wonder if she has been captured or if he has saved her life after a car accident.

Before you know it she discovers another man is living there too, who helped build the shelter that they are living in and he seems completely normal, but they are both concerned about the guy they are living with who seems crazy.  The suspense continues to build as you discover that there may have been a chemical attack and this strange man may have actually saved their lives.

The suspense keeps building as the woman and the man plan their escape from the shelter to go for help and it just gets more and more wild.  Eventually, the suspense comes to a climax and the thrill ride turns a bit insane as a horror movie.  It goes from being a thriller to more of a horror film and gets more intense.  Our son Conroy and his friend Lance went with Becky and I and we all really liked it.

Becky and I both liked it and thought it was a Don’t Miss It, but be prepared that it’s pretty wild and it is disturbing at times and over-the-top toward the end of the movie, but they tied it together really well.