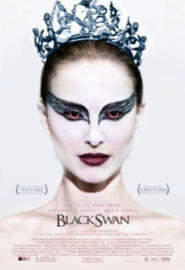 Becky and I went to see Black Swan over Christmas week at the AMC Theaters in Highlands Ranch, CO. The MovieFone website at Black Swan describes the movie as follows:

“‘Black Swan’ follows the story of Nina (Natalie Portman), a ballerina in a New York City ballet company whose life, like all those in her profession, is completely consumed with dance. She lives with her retired ballerina mother Erica (Barbara Hershey) who zealously supports her daughter’s professional ambition. When artistic director Thomas Leroy (Vincent Cassel) decides to replace prima ballerina Beth MacIntyre (Winona Ryder) for the opening production of their new season, Swan Lake, Nina is his first choice. But Nina has competition: a new dancer, Lily (Mila Kunis), who impresses Leroy as well. Swan Lake requires a dancer who can play both the White Swan with innocence and grace, and the Black Swan, who represents guile and sensuality. Nina fits the White Swan role perfectly but Lily is the personification of the Black Swan. As the two young dancers expand their rivalry into a twisted friendship, Nina begins to get more in touch with her dark side with a recklessness that threatens to destroy her…”

The Review
Black Swan is what a buddy of mine and I refer to as, “the lesbian horror flick”. The acting is fantastic and Natalie Portman does a great job in her role as a psychotic ballet dancer.  The movie poster pretty much sums up this movie and what you can expect.

Unfortunately, the story is really lame with way too much filler as the ballerina tries to find her way in the leading role as the white and black swan. The movie has plenty of suspense and a great deal of drama. The characters are rather interesting with sex, drugs and ballet instead of rock and roll. Black Swan comes complete with sexual fantasies by Natalie Portman’s character of her fellow ballet characters and other people in the film. Her Mom is a total lunatic that has helped create this whacky ballerina, along with some other whacko’s in the world of ballet.

The movie has some deep meaning that goes along with the ballet that it’s portraying and that’s why there is so much buzz around this movie, but it didn’t deliver for Becky and I. We both thought it was a rental at best and I thought it was a total waste of time.