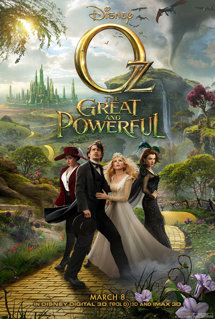 “When Oscar Diggs, a small-time circus magician with dubious ethics, is hurled away from dusty Kansas to the vibrant Land of Oz, he thinks he’s hit the jackpot – fame and fortune are his for the taking – that is until he meets three witches, Theodora, Evanora and Glinda, who are not convinced he is the great wizard everyone’s been expecting…”

The Review: We were all really looking forward to seeing this movie and figured that it would be like Tim Burton’s epic Alice In Wonderland, but Sam Raimi is no Tim Burton.  This movie wasn’t even close to as good as the original Wizard of Oz that was made back in 1939 before any special effects and color was just invented.

I didn’t believe the reviews from the critics that this movie wasn’t very good, but I do now.  Sam Raimi should have never directed this movie, he sucks as a Director to botch this one as bad as he did.  Come on, did he even watch the original movie?  Totally forgetting to put in the Ruby Red slippers?  That’s like making The Lord of the Rings and forgetting to put in the ring!

They cast the Wicked Witch wrong, Mila Kunis was terrible as the Wicked Witch, sometimes forgetting she was a witch and talking like a Valley Girl and her appearance didn’t even come close to the original witch.  If you put the two of their photos side by side, you’ll ask “How did they miss that?” and her voice was not even close to one of the best witches of all time, “I’ll get you my pretty and your little dog too.” is a classic line.  Disney’s only interested in making a buck now and you can see it in this film because the story and inconsistencies in the film made it weak.

The story had far too many holes in it, way too much filler where they could have done so much with the Wizard of Oz had they actually stayed even close to the original story.  It was as if they couldn’t decide, if they were making Alice In Wonderland again and trying to compete with Tim Burton or the Wizard of Oz before Dorothy showed up.  Which I might add, she was in the same tornado as the original Professor Marvel, who turned out to the be Great and Powerful Oz in the original story, so Hollywood botched up a classic with this one.  Did they really think that Wizard of Oz fans wouldn’t notice?  It’s a bit like remaking Star Wars and casting Darth Vader with Brad Pitt, putting him in a business suit like Meet Joe Black and then wondering why people are not excited about your movie.

The special effects were all this movie had going for it, which is fitting since that’s all Oz was doing anyway.  Apparently, Disney and Raimi didn’t want the audience to look behind the curtain either.  The flying monkey’s are now flying baboons and there was very little else that was close to the original of this movie.  It’s at best a good rental, but if you have a choice between watching the original Wizard of Oz and this Disney destruction of a classic, go with the original where you’ll actually see the ruby red slippers, which are an integral part of the story.