Becky and I went to see the new Marvel comic movie Captain America: The First Avenger on Sunday at the Regal Theater in Lone Tree. The Fandango website at Captain America describes the movie as follows:

“After being deemed unfit for military service, Steve Rogers volunteers for a top secret research project that turns him into Captain America, a superhero dedicated to defending America’s ideals.”

The Review
Captain America: The First Avenger was really well done.  The story is wild and exciting, the characters are great and it’s really a fun film. Becky wasn’t a big fan because she doesn’t really like Super Hero movies too much.  Corban, Bianca and I really liked it, but Conroy wasn’t happy that the film had super advanced weapon technology during World War II.  I thought it was pretty cool because the villain in the movie was a total whack job, a bit like the insane characters found in Hell Boy.

If you’re into comic book movies you should like Captain America, but if you’re not you should probably skip this one.  It will be interesting to see how they do The Avengers film that is coming out in 2012 along with the characters of Thor, Iron Man and Black Widow.  At the end of the credits they have a Preview of the coming Avengers movie for next year.

John is an auto consultant and owner of CoolCarGuy.com with his license at a car dealership in Denver, Colorado. He can help you save time and money on any make or model, new or used, lease or purchase – nationwide! Call or email John about your next vehicle! jboyd@coolcarguy.com or Twitter@coolcarguy

“Dylan and Jamie think it’s going to be easy to add the simple act of sex to their friendship, despite what Hollywood romantic comedies would have them believe. They soon discover, however, that getting physical really does always lead to complications.

The Review
Friends With Benefits is not a very good film.  It’s pretty much the same movie as No Strings Attached with Ashton Kutcher earlier this year, only with more skin.  A couple of people who are in bad relationships decide that they should just have sex together and not get emotionally attached.

This movie really didn’t have any substance.  They decided to add some dimension to the film with Justin Timberlake’s father suffering from memory loss as he goes through a terminal illness and Mila Kunis character’s Mom is a bit nuts.  It doesn’t really make any sense and it tries to be funny.  They added the token gay guy played by Woody Harrelson to the movie as well to try to get some more laughs.

John is an auto consultant and owner of CoolCarGuy.com with his license at a car dealership in Denver, Colorado. He can help you save time and money on any make or model, new or used, lease or purchase – nationwide! Call or email John about your next vehicle! jboyd@coolcarguy.com or Twitter@coolcarguy

Becky and I went to see the new comedy Horrible Bosses on Friday at the AMC Theater in Highlands Ranch with our friends Mark and Maria. The Fandango website at Horrible Bosses describes the movie as follows:

“Nick (Jason Bateman), Dale (Charlie Day) and Kurt (Jason Sudeikis) are workers who would like nothing better than to grind their oppressive employers into the dirt. Quitting their jobs is not an option, so — fueled by alcohol and dubious advice from a criminal (Jamie Foxx) — the men devise a complex and seemingly foolproof plan to permanently rid themselves of their terrible bosses. The problem is, any plan is only as clever as the brains behind it.”

The Review
horrible Bosses Is a crude movie like The Hangover, but like The Hangover it is hilarious. The three main characters played by Jason Bateman, Charlie Day and Jason Sudeikis are a crackup, as they go on a mission to kill their bosses. This is one of those films where you are laughing at a joke or a situation, while one of the characters are saying or doing something else that is funny.

Their bosses are totally nuts, played by other actors with serious Hollywood star power and that is what makes this film even more funny. There are some crazy situations that they all find themselves in throughout this movie. It ties together at the end in a very whacky way that is really well done.

Be forewarned that the language is very rough and so are some of the situations and things these characters do. Many people may find this movie too over-the-top or offensive like The Hangover, but we all thought it was really funny and well done.

We liked it enough to rate it a Don’t Miss It, if you’re a fan of comedies. I think you will be hard pressed not to laugh. The whole theater we were in was cracking up over this flick.

Becky and I went to see the new Transformers movie today at the AMC Theater in Highlands Ranch.  The Fandango website at Transformers: Dark of the Moon describes the movie as follows:

“Sam Witwicky (LaBeouf) taking his first tenuous steps into adulthood while remaining a reluctant human ally of Optimus Prime. The film centers around the space race between the U.S.S.R. and the USA, suggesting there was a hidden Transformers role in it all that remains one of the planet’s most dangerous secrets. The villain of the third film will be Shockwave.”

The Review
Transformers: Dark of the Moon is the third and hopefully the final installment of the Transformer movies.  It’s has a good story that is different than the other two films with plenty of action and twists to keep the story moving forward and interesting.  The Director went out of his way to explain how the hero lost his gorgeous girlfriend Megan Fox from the previous two movies and replaced her with the underwear model Rosie Huntington-Whiteley.  The guy has to be a hero to keep getting these beautiful women on his arm.

Unfortunately, the movie is extremely long, over two and a half hours and we could only take so much of the special effects of cars turning into giant robots to blow things up.  The acting is pretty good in the film, but I have to say the best thing about the movie to me was definitely the cars.

They have some amazing rides in this flick, including the Bumble Bee yellow and black fifth-generation Chevy Camaro.  An autobot turns into a great looking silver Chevrolet Corvette Stingray convertible.  A stunning red Ferrari 458 Italia that was definitely one of my favorites in the movie.  They also had a Dale Earnhardt, Jr. #88 AMP Energy/National Guard car, a Juan Pablo Montoya #42 Target car and a Jimmie Johnson #48 Lowe’s/Kobalt car, which was totally ridiculous I thought.  A blue Mercedes-Benz W212 was a robot inventor, whose design was supposed to resemble Albert Einstein and again was really goofy.  Finally, they featured a silver Mercedes-Benz SLS AMG that was really great on the big screen.

Becky didn’t like this movie at all and fell asleep several times.  I liked it much better than she did, but it wasn’t fantastic by any stretch.  You may want to wait for the rental, so that you can pause it and watch it over a two day period, unless you’re under 15 years old.  I’m sure our boys will really like it, but they are 11 and 13 years of age.  I thought it was in between a rental and worth the trip, but I’ll give it a rating of Worth The Trip only if you like Sci-Fi and Transformer movies.

Sponsored By: Looking for a great income opportunity with awesome products? Click here! 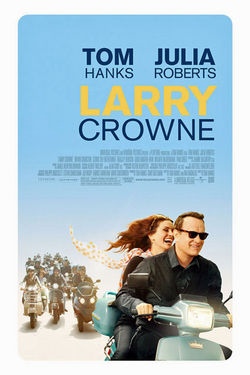 Becky and I went to see the new Tom Hanks movie Larry Crowne on Friday night in Castle Rock at the AMC Theater.  The Fandango website at Larry Crowne describes the movie as follows:

“Once well-respected at his company, Larry Crowne (Tom Hanks) finds himself on the unemployment line after a wave of corporate downsizing. Drowning in debt and unsure of what to do with his life, Larry enrolls in college, where he becomes part of a community of misfits who are all trying to carve out a better future. The possibility of romance enters the picture when Larry meets Mercedes Tainot (Julia Roberts), an instructor who has lost her passion for both teaching and her marriage.”

The Review
Larry Crowne is a well done film that deals with real life situations that are facing millions of people today. It focuses on a man, Larry Crowne, who loses his job for no rational reason other than he didn’t go to college.

The plot thickens when he goes back to school and meets his new teacher played by Julia Roberts.  She just happens to be unhappily married and going down the path of becoming an alcoholic because her life is miserable.  It makes for some interesting dynamics with a number of different characters that show up in Larry’s life and at times it’s a somewhat serious drama while still light-hearted for the most part.

It’s not a great movie, but it was pretty entertaining for the most part.  It’s between being a good rental and worth the price of admission.  We both leaned toward it being worth the trip because it is very relevant for today and was entertaining.