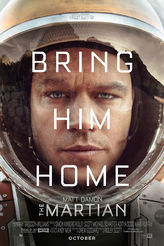 We are a bit behind on movie reviews and trying to catch up this Weekend, so I will start with the new Matt Damon movie The Martian.  Becky and I went to see the new movie The Martian at the Megaplex movie theater in St George, Utah last week while we were running the St. George Marathon. The Fandango website at The Martian. describes the movie as follows…

“AAfter an exploratory mission goes awry, lone astronaut Mark Watney (Matt Damon) is left for dead on the hostile surface of Mars and must use his scientific ingenuity to homestead an enclosed habitat where he can survive. Meanwhile, the astronauts he left behind realize the severity of his plight and join forces with an international coalition of scientists to launch a rescue mission in defiance of NASA protocol..”

The Review:  Okay.  This is the most over-rated movie we have seen all year.  I will start out by saying it is a Rental after sitting through it for 2 and a half hours and waiting for it to eventually end.  Everyone loves this movie and we do not know why.  Did they see something that we didn’t?  We think it will be a great rental since you can pause it and go do something and come back and little will have changed from the time you leave until you start again.  Matt Damon will still be stuck on Mars!

If you’ve seen Castaway with Tom Hanks lost on a desert island with Wilson his volleyball then you have seen this movie, only now Matt Damon is on Mars with his rover and his plants.  He does get to chat with people on Earth via his computer and that’s pretty exciting.  If you have seen Gravity with Sandra Bullock lost in space than you have already seen this movie, only with Matt Damon on Mars trying to figure out how to stay alive on the planet Mars with little hope for survival.  Sound familiar? Apparently, the movie critics and the public have a had a short term memory loss because nobody seems to remember these two movies and had that “Ah Ha” moment.  Maybe it is because there are actually more scenes in this movie with other people than just Matt Damon, where Gravity killed everyone off pretty quickly and Tom Hanks had no support other than his imaginary friend.

The guy who wrote this must have seen both of these movies and said, “Oh my gosh, if I put a new title on these two films and merge them together with a few more characters and call it “The Martian” I’ll earn a gazillion dollars.”  It’s the same plot as the other films though when you get down to it.  One guy for two and a half hours trapped alone on a deserted place (simply insert an island, space, Mars) and trying to figure out how he is going to survive.  There was very little that was new here.  The acting was good and the Directing was good, but the story was a rehash.  If you liked those other two films than you will really like this movie, but it’s really like a sequel for those two films with Matt Damon instead of Tom Hanks and Sandra Bullock.

Becky and I both were bored out of our minds after about an hour and fifteen minutes of this movie, so we had to rate it a rental. I would not believe the “hype” and wait for this one to come out on Netflix or the Redbox.