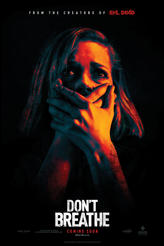 Becky and I went to see the movie Don’t Breathe with Corban and Bianca at the AMC Cinema in Castle Rock, CO about a week ago.  The Fandango website at Don’t Breathe describes the movie as follows…

“Three friends (Dylan Minnette, Jane Levy, and Daniel Zovatto) plot to end their money woes by burglarizing the home of a blind recluse (Stephen Lang), but the heist quickly goes awry when they discover that their target is concealing a horrifying secret — and that he isn’t as harmless as they had thought….”

The Review:  Don’t Breathe is a wild movie about three burglars who make the mistake of robbing the wrong person.  I can’t really tell you too much about the film without giving it away other than that it’s suspenseful and scary.  It’s pretty violent and disturbing since breaking into the home of a blind person is a very heinous crime to being with, but it gets more strange as the movie progresses.

The story is well done because there are plenty of twists and turns throughout the film.  The movie is different than any that we’ve seen before and it’s well done.  It has enough plot twists that it will leave you asking some questions at the of the movie, which is one of the reasons why we liked it.

We went in with really low expectations and liked it more than we expected.

Corban and Bianca liked it as well.