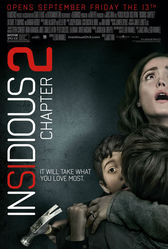 ”The famed horror team of director James Wan and writer Leigh Whannell reunite with the original cast of Patrick Wilson, Rose Byrne, Lin Shaye, Barbara Hershey and Ty Simpkins in INSIDIOUS: CHAPTER 2, a terrifying sequel to the acclaimed horror film, which follows the haunted Lambert family as they seek to uncover the mysterious childhood secret that has left them dangerously connected to the spirit world…”

The Review:  Insidious: Chapter 2 is the second chapter of the movie Insidious, which wasn’t a great movie to begin with and Chapter 2 is not any better.  It’s a supposed to be a scary movie, but it’s not very scary.  There are a few scary parts in the film, but for the most part the story is pretty lame.  It can’t decide if it’s a thriller or a horror film.  It’s pretty much the same as the first film, so there really isn’t anything very new with this movie, but it’s not done nearly as well.

The characters are not terrible, but there are a couple of them that should have been left out of the film, like the old lady helping to figure out why the spirits are haunting the family.  Her character was lame and her acting was really bad.  Rose Byrne was good in the film and so was Patrick Wilson, but they couldn’t hope to save this movie.  The story overall is pretty lame as you follow this family being haunted by the ghost of a woman and her son who are angry in death as they were in life.  It really doesn’t make any sense at all.

All three of us were extremely bored.  I think I jumped one time in the entire film and it was more of a startle than anything.  Your best bet is to wait for the rental on this one or skip it all together.