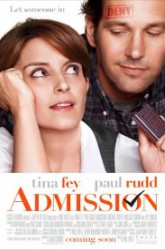 Becky and I are a little behind on the movie reviews again, but we went to see Admission with Tina Fey and Paul Rudd a few weeks ago at the AMC Theater in Castle Rock, CO. The MovieFone website at Admission describes the movie as follows…

“Tina Fey (‘Date Night’, 30 Rock) and Paul Rudd (‘I Love You Man’, ‘Knocked Up’) star in ‘Admission’, the new film directed by Academy Award nominee Paul Weitz (‘About a Boy’), about the surprising detours we encounter on the road to happiness…”

The Review:  We didn’t have huge expectations going into this movie, which is probably why we liked it and thought it was worth the price of admission.  The story is cute and funny at times, but it’s not a full blown comedy as it is classified.  It’s really more of a drama, with some pretty serious parts of the movie as Tina Fey’s character discovers that she may have a son that she didn’t know about from a long time ago.

It’s an interesting story and the characters work very well together.  Paul Rudd and Tina Fey play off each other very well and this movie takes some twists and turns, while making a joke out of the admissions process for an Ivy League school, which in itself was pretty funny.  There are quite a few laughs and we did like the way the movie ended, which was not what we expected.  That’s another reason why we liked the movie because we thought that it was going to be predictable going through the movie and it turned out to be very unpredictable.  One of the reasons why that was entertaining is because the characters in the film are predictable, but it shows that life can always throw you a curve ball.

We both like the movie and thought it was Worth The Trip.  If you miss it at the box office, put it on your rental list as a good lighthearted Comedy / Drama.