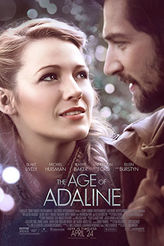 Becky and I went to see the new movie The Age Of Adaline last week as a sneak preview at the AMC Theater in Highlands Ranch, CO. The Fandango website at The Age of Adaline describes the movie as follows…

“Adaline (Blake Lively) has kept to herself for decades in order to keep secret the fact that she has remained 29-years-old for nearly a century. However, when she meets a handsome philanthropist named Ellis (Michiel Huisman), she strains against the self-imposed exile she’s lived in. When her secret may become public, she is forced to take greater control over her life. Harrison Ford and Kathy Bakerco-star. ~ Perry Seibert, Rovi…”

The Review: This movie was pretty cool.  It’s about a woman who has a miraculous event that allows her body to stop the aging process.  That in itself makes for an interesting story, but it becomes quite complicated as she deals with not aging, while everyone around her continues to grow old.  It creates some real problems for her though as she cannot allow other people from her past to know her secret.

It’s a bit like a Twilight Zone story with a Rod Sterling type voice who explains the story as it goes forward at different times, which is a little odd and kind of annoying.  One thing that I found really fascinating is that the main character, played by Blake Lively, has her anti-aging because of extended telomeres.  I use a nutritional product that claims to do this same thing called Imortalium and they have a cool video about it.  I take the product everyday and it’s a great product.  I wrote an article about how people can earn an additional income promoting this one anti-aging product at ShareMerchant.com.

Becky and I really liked this movie and thought it was definitely a Don’t Miss It. It’s a great date night film and most people liked it.  It’s a very well done romantic movie that we both really liked.  It’s very well done.