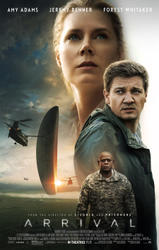 Becky and I went to see the movie Arrival at the AMC Cinema in Destin, FL last week when we were visiting our relatives and running The Pensacola Marathon.  The Fandango website at Arrival describes the movie as follows…

“Denis Villeneuve directed this science-fiction suspense film about Earth’s response to a possible alien invasion. After extraterrestrial spacecraft plant themselves at various locations around the globe, a linguist (Amy Adams) and a theoretical physicist (Jeremy Renner) must find a way to communicate with the mysterious visitors….”

The Review:  Arrival has a 93% good on the Rotten Tomatoes website, but don’t believe the hype on this movie.  It’s a confusing, slow moving, boring film that is about aliens landing on planet Earth.  As if we’ve never seen that storyline before?

Our nephew Sterling had seen the movie the night before and he tried to warn us, but we were going off of all the great reviews and figured we had to go see it.  We should have listened to Sterling who told us it was pretty boring.  That’s the understatement of the year.  This movie is the classic alien film where mankind is bad and aliens are good, but they through in some time warp element as well that was supposed to make it better.  It didn’t.

The acting is good, the story is terrible, the movie moves as a snails pace for two hours and you are just hoping it will get over soon.  At the end of the movie, the guy at the end of our row said it best, “That was a complete waste of my time.” and most of the people in the theater started laughing because we all agreed.  This is definitely one to wait for at the rental box or when they show it a dozen times on one of the cable networks.