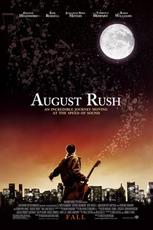 Becky and I went to see August Rush at the AMC theaters in Highlands Ranch, Colorado tonight. The Fandango website at August Rush describes the movie as follows:

“Twelve years ago, on a moonlit rooftop above Washington Square, Lyla Novacek (Keri Russell), a sheltered young cellist, and Louis Connelly (Jonathan Rhys Meyers), a charismatic Irish singer-songwriter, were drawn together by a street musician’s…”

The Review
August Rushis a great movie! Forget what the critics say about this film, the audience actually applauded at the end. Unlike the other movie we saw last week with a catchy title, No Country for Old Men, August Rush doesn’t have people being shot for no reason that the critics can get excited about. Quite the contrary, this is a heart warming and moving story with music as good as that of a classic film like Mr. Holland’s Opus.

Sure, the story is a bit unrealistic, but it grabs you with awesome characters, fantastic acting and a great story even if it was a bit over the top. It gives the audience everything that we want emotionally and why we go to the movies in the first place.

It stars that cute kid from Charlie and The Chocolate Factory, Robin Williams in a different role than we are used to seeing him in and Kerri Russell. It’s a great family film for Thanksgiving and although it’s rated PG and fine for kids, our kids that are under 10 would probably have been bored with the movie.

This is one of the few movies this year that we really think you’re not going to want to miss.