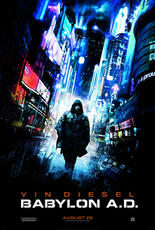 Becky and I went to see Babylon A.D. on Friday night at the AMC theaters, in Highlands Ranch, CO. The Fandango movie website at Babylon A.D. describes the movie as follows:

“It is the not-too-distant future. Thousands of satellites scan, observe and monitor our every move. Much of the planet is a war zone; the rest, a collection of wretched way stations, teeming megalopolises, and vast wastelands punctuated by areas left radioactive from nuclear meltdowns. It is a world made for hardened warriors, one of whom, a mercenary known only as Toorop, lives by a simple survivor’s code: kill or be killed…”

The Review
Babylon A.D. is a PG-13 film that should be rated R. It is described as having intense sequences of violence and action, language and some sexuality, which is definitely the case with this flick. The movie is not done very well and is at best a rental. It was directed by a French guy and written by a French guy as well, so I guess it’s a foreign film with some American actors. It’s a bit of a strange flick to say the least and a scary look at the future.

Babylon A.D. is about a cult that hires a genius to combine a human with a super computer, so that they can create a virgin birth. Vin Diesel is hired to save the girl and bring her to the cult leaders in America, while not getting killed in the process. It reminded me kind of like Sylvester Stallone or Arnold Schwarzenegger’s futuristic type films at the end of their careers as action hero’s, only done better because of the special effects, but still it didn’t keep you that interested in the characters to want to watch it more than once – ever.

Becky and I thought it was okay, but not a great enough of a flick to recommend it. We would suggest saving your money, don’t watch this with your kids when it hits the rental rack, but if you like sci-fi action type films you will like it as a rental.

John is an auto consultant with JFR & Associates in Denver, Colorado. He can help you save time and money on any make or model, new or used, lease or purchase – nationwide! Call or email John about your next vehicle! jboyd@coolcarguy.comLove Takes Wing movie download