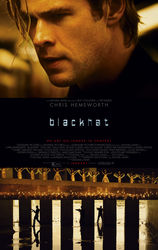 Becky and I went to see the new Chris Hemsworth movie Blackhat at the AMC Theaters in Highlands Ranch, CO this Weekend.  The Fandango website at Blackhat describes the movie as follows…

“An American/Chinese joint anti-cybertheft task force races to root out an elusive hacker based in Southeast Asia in this Legendary Pictures thriller written, produced, and directed by Michael Mann, and starring Chris Hemsworth. ~ Jason Buchanan, Rovi…”

The Review: We were really looking forward to seeing this film since it seemed like it was going to be a great thriller about how someone could use cyber terrorism in a way we hadn’t seen before.  Instead it was over two hours of non-stop boredom.  The cinematography was terrible with the camera moving all over the place.  The Director shouldn’t be allowed to direct a Youtube video since it was on step above a bad Chinese feature film.  This movie was really terrible.

I won’t bore you with all the details, but this movie did not delivery in the least.  It was so bad that I got up at one point and looked at Becky and said, “Let me know what happens.  No, let me know if anything happens.” because really this is a film where nothing happens.  They take a minute showing people walk up stairs or get into a car or climb into bed.  It’s so incredibly painful to watch that we wouldn’t recommend even renting this film.

There you have it.  This is a big don’t bother for sure.