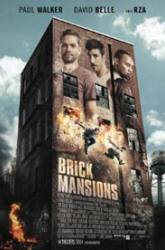 I’m behind on about four or five movie reviews, but I’m starting with the one one saw last night and hopefully I’ll catch up this weekend.  I’ve been too busy delivering vehicles and working on my Network Marketing ventures to write reviews, but we’ve seen some movies recently that I need to write reviews about.  Becky and I went to see the last Paul Walker movie Brick Mansions last night at the AMC theaters in Castle Rock, CO. The Moviefone website at Brick Mansions describes the movie as follows…

“In a dystopian Detroit, abandoned brick mansions left from better times now house only the most dangerous criminals. Unable to control the crime, the police constructed a colossal containment wall around this area to protect the rest of the city.”

The Review:  Brick Mansions is a terrible movie.  The acting is bad, the story is stupid, the violence is ridiculous and it’s a bit like a bunch of comic book characters.  The opening scene is really the best, which I think they took out of a James Bond film with the guy jumping all over the place and not being caught because of his ability to leap over people, jump down stairs and over buildings without getting injured.  It’s fun to watch and then it goes downhill from there. It’s unfortunate that it was Paul Walker’s last movie and they dedicate it to him at the end of the movie.

The story is about how in 2016, Detroit has gotten so bad that they seal off the place known as Brick Mansions from the rest of the city.  The Mayor wants to put a bomb in the middle of the city, wipe everyone out and rebuild it after it’s a wasteland for some rich real estate developers.  The main drug dealers in the inner city is brought to justice by Paul Walker and he’s going in to take revenge on another guy who worked for the kingpin that supposedly killed his Father, who was also a cop.

Like I said, the story is pretty stupid and the acting is just terrible.  At one point the drug lord goes from talking in a Detroit accent to a Jamaican accent.  The fight scenes made no sense, along with the car chases where at one minute they don’t want to shoot them and the next minute they are using machine guns mounted on a truck to take out a Ford Mustang.  The main characters get in situations where they would certainly die or be injured with unbelievable MMA type fight scenes and they come out without even a black eye.  It was ridiculous.

This is definitely one to skip and save your money, even if you’re bored.