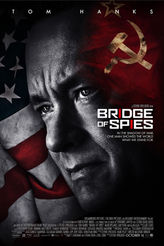 Becky and I went to see the new movie Bridge of Spies at the AMC Theater in Highlands Ranch, CO on Friday night. The Fandango website at Bridge of Spies. describes the movie as follows…

“In this historical drama set during the Cold War, a Brooklyn attorney (Tom Hanks) is tasked with negotiating a prisoner exchange between an American pilot who was shot down over the USSR and a Soviet spy serving a 45-year sentence for espionage against the U.S. Bridge of Spies was directed by Steven Spielberg and written by Matt Charman and Joel and Ethan Coen….”

The Review:  Tom Hanks is an amazing actor and Spielberg is a fantastic Director, so you can expect a great movie when they come together to create a blockbuster.  The biggest challenges with this movie are that it’s very long and at times it is a bit boring, but the acting and the directing are superb.  It’s a great movie, especially if you like history, but it is long.

The movie is extremely well done though and it’s based on a true story, which makes it very interesting.  It was a great movie and most people I have talked to really enjoyed it as we did.  It’s one of the best movies that Spielberg has made in a really long time and definitely a don’t miss it.

Bridge of Spies is worth seeing at the box office and make sure you watch it when it comes out at the rental box.