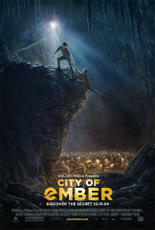 I took the day off last week with the kids and we went to see City of Ember at the Kerasotes theaters in Castle Rock, CO. The Fandango movie website at City of Ember describes the movie as follows:

“For generations, the people of the City of Ember have flourished in an amazing world of glittering lights. But Ember’s once powerful generator is failing… and the great lamps that illuminate the city are starting to flicker. Now, two teenagers in a race against time, must search Ember for clues that will unlock the ancient mystery of the city’s existence, and help the citizens escape before the lights go out forever.”

The Review Rain Man hd
City of Ember is an interesting story about the end of the world and how the last people alive move underground with the understanding that they would eventually go back to the surface of the Earth at the right time. Unfortunately, as time passes the plan gets lost and the people go about their business living in the City of Ember until it’s too late.

The Hitcher download Venom movie The movie is pretty well done and interesting. It’s a kid’s film, but it was entertaining. I don’t think it’s an amazing piece of work, but it was fun. Bill Murray was good and so was Tim Robbins, as well as the young star actors. The directing is good too.

City of Ember isn’t a blockbuster, but I think it’s a good rental for the family. The kids liked it more than I did, but I was glad I took them for a matinee.