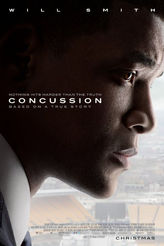 Becky and I went to see the movie Concussion at the AMC theater in Castle Rock, CO tonight.  The Fandango website at Concussion describes the movie as follows…

The Review:  I wasn’t really that interested in seeing this film after seeing the Preview for the movie, it pretty much had given the whole film away.  I am seeing quite a few movies like this recently where you watch the trailer for the film and you pretty much saw the whole movie, which takes the mystery out of wanting to see the film.  Nevertheless, Becky and I decided to go and catch this new movie based on a true story about a doctor who took on the NFL to expose their deception concerning concussions in football.

Concussion stars Will Smith as the doctor from Nigeria, who the NFL went out of their way to discredit for his research on a famous NFL player after his death.  The story is really amazing because of the fact that the doctor spent his own money to do the autopsies on the players and spent countless hours researching what happened to these NFL hero’s.  The NFL denied his research and the player’s deaths from brain trauma out of fear, rather than trying to actually prevent the problem and found a solution to the problem for these men.  The movie was really well done, with quality acting and directing.  It doesn’t paint the NFL and their owners in very good light, but it’s an interesting story even if you’re not a football fan.

We both liked it and even Becky thought it was a Don’t Miss It and she is not a football fan.