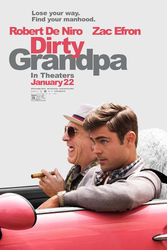 Becky and I went to see the movie Dirty Grandpa at the AMC Theater in Castle Rock, CO last week. The Fandango website at Dirty Grandpa is describes the movie as follows…

“Straight-laced lawyer Jason (Zac Efron) goes on a road trip to Daytona Beach with his horndog grandfather Dick (Robert De Niro), who was recently widowed and is eager to party hard on spring break now that he’s a single man. Along the way, Dick prods Jason to let loose and have fun, and tries to convince him that he shouldn’t get married to his controlling fiancée (Julianne Hough)…”

The jokes are stupid the movie has a few times that it is funny, but most of the time it was just ridiculous and even disturbing.  It was a boring movie that wasn’t worth the price of admission and several people in our theater got up and left.  There isn’t much more to say other than that you have Zac Efron and Robert De Niro who both are popular actors in a terrible movie that could have been funny.  Instead this movie was really just crude and really stupid.

This is definitely a movie that you don’t want to waste your time seeing.