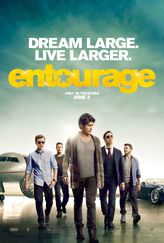 Becky and I went to see the new movie Entourage this past Weekend in Orlando, FL at a Regal Cinema, while we were on vacation to Universal Studios, Orlando.  The Fandango website describes the movie as follows..

“In this raunchy satire based on the hit HBO series, young Hollywood A-lister Vincent Chase (Adrian Grenier) and his posse of best buds (Kevin Connolly, Jerry Ferrara and Kevin Dillon) negotiate the perils and pleasures of Hollywood life, with the help of superagent Ari Gold (Jeremy Piven) ~ Violet LeVoit, Rovi”

The Review: The description above describes this film perfectly with the keyword being raunchy satire and that’s exactly what this movie is on a mega scale.  The characters cuss like a bunch of teenagers, who just discovered swear words for the first time and there is a constant reference to sex and drugs.  It also has plenty of sex scenes that could make a porn star blush, but apparently this is how Hollywood rolls.  There are quite a few cameo appearances by a large number of actors and other famous people.   A few of them had me scratching my head though, like Andrew Dice Clay.  Really?  At times I thought I was watching a strange episode of The Celebrity Apprentice.  There are some big name people, who show up in the film as well, like the quarterback for the Seattle Seahawks.  I’m not sure who talked him into being in this film, but after he watched it he might have questioned what his agent was thinking at the time.  This movie didn’t fit his image, probably some other NFL players that have been in the news would have been a better fit.

We didn’t know that this was made from an HBO series that ran from like 2004 to 2011, which begs the question why they would wait another four years to make the movie?  Seems like most of their fan base would have moved on to Game of Thrones or some other HBO series.  Might have been the idea of a talent agent who talked some of these other characters to be in the movie.  The movie is really stupid, but it does have a few good laughs.  Some of the characters are pretty funny and the story could have actually been good, if it didn’t resort to living in the gutter constantly by trying to target an audience of teenagers.

It has a fairly complex storyline about a movie studio head who decides to give the reigns of a $100 million dollar film to an actor, who wants to direct his first movie.  The actor just happens to be his former client, when he was his agent, so there is a big conflict of interest and everyone thinks he’s nuts.  The character Ari Gold has to answer to his strange Texas investor played by Billy Bob Thornton and his spoiled brat son, along with the Chairman of the Studio and this whole decision is putting him in a position of losing his new job.  That’s a pretty funny story, but the delivery of the film was pretty screwed up.

This movie pretty much sucked, but I had a few good laughs, so I am going to rate it a rental.  Becky hated it and thought it was a total waste of time and she is probably right, but the acting was good, the story was good and there were a few good laughs.  I’m not sure who their audience is going to be on this one though, but maybe it will make a boatload of cash at the box office and we will be completely wrong when it wins an Oscar.  I doubt it though.