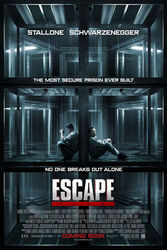 Becky and I went to see Escape Plan back in October at the AMC Theaters in Castle Rock, CO.  The Fandango website at Escape Plan describes the movie as follows…

”Action superstars Sylvester Stallone and Arnold Schwarzenegger team up in the action-thriller ESCAPE PLAN. Ray Breslin (Stallone), the world’s foremost authority on structural security, agrees to take on one last job: breaking out of an ultra-secret, high-tech facility called “The Tomb.” But when he is wrongly imprisoned, he must recruit fellow inmate Emil Rottmayer (Schwarzenegger) to help devise a daring, nearly impossible plan to escape from the most protected and fortified prison ever built…”

The Review:  Escape Plan is one of those movies that Becky and I went to see that we had really low expectations for going into the theater.  We figured this movie was going to really suck, but at the time we had already seen everything and figured we would go see it.  It actually wasn’t a terrible film like we expected.  It was a typical Sylvester Stallone movie with a bunch of action and far fetched, but it was pretty fun.

The story was actually pretty wild and it was done much better than we thought it would be.  The prison that the main character gets locked into is very futuristic and is probably something that will be designed to incarcerate people.  It’s actually a pretty scary premise and how they developed this prison and where they put the prison is very creative in this movie.  What’s unique is why the people get sent to this prison because they are put away by people who want them to disappear and are paying to have them locked up unless they need them again.  This made the movie pretty interesting.

Escape Plan is not a great movie, but it should be a good rental and we actually enjoyed it at the film, which we were surprised about.   Becky and I both liked it and thought it was between worth seeing and waiting for as a rental, but I think most people will wait to see this when it hits Redbox.