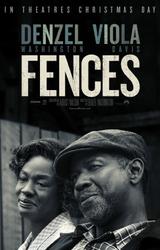 Becky and I went to see the new movie Fences at the AMC theater in Highlands Ranch, CO.  The Fandango website at Fences describes the movie as follows…

“Denzel Washington directed and stars in this adaptation of August Wilson’s Pulitzer Prize-winning play, which centers on a black garbage collector named Troy Maxson in 1950s Pittsburgh. Bitter that baseball’s color barrier was only broken after his own heyday in the Negro Leagues, Maxson is prone to taking out his frustrations on his loved ones. Both Washington and co-star Viola Davis won Tonys for their performances in the 2010 revival of the play. …”

The Review:  Fences is a movie that is directed by Denzel Washington, who also stars in the film, along with Viola Davis as his wife.  It takes place in the 1950’s with plenty of racism and little opportunity available for an African American man, who is trying to get ahead in the world.

Okay.  We went into this movie with great expectations and the acting was amazing.  The problem for us was just about every other word out of Denzel’s mouth for half of the film was the “n” word, which was really annoying.  The story wasn’t very good because it was boring watching this really selfish man craving attention from his wife and children with very little honor for his wife or others.  If you’re getting the drift here we didn’t like the movie.

The acting was incredible and even the directing was good, but it’s for a very limited audience that can maybe relate to someone who was so self-centered that he was lost in his own world.  It wasn’t “entertaining” and it wasn’t “educational”, but it was disturbing, which maybe was the intention of the film.  Much like Manchester by the Sea, this is an over-rated film that wasn’t very good.