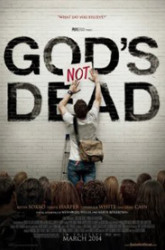 Becky and I went to see the new Christian movie God’s Not Dead with our son Conroy at the AMC Theaters in Highlands Ranch, CO yesterday. The MovieFone website at God’s Not Dead describes the movie as follows…

“A devoutly religious college freshman must debate the existence of God with his skeptical philosophy professor in order to earn a passing grade in this faith-based comedy-drama featuring Kevin Sorbo and David A.R. White. Josh Wheaton (Shane Harper) is a Christian who never thought his faith would get in the way of his higher education. As a result, he is deeply shaken when, on the first day of his Philosophy class, Professor Radisson (Sorbo) begins the semester by demanding that each of his students deny the existence of God in order to earn a passing grade…”

The Review: At the risk of upsetting many of my fellow Christian friends, I have to be brutally honest about this film.  And I do mean “brutally honest”.  The first thing that I wanted to write is “God’s not Dead, but Christian movies are.”.  Why do Christians have to make such terrible movies and get Christians to support them out of “necessity” because they are so bad.  If they were good, they could stand on their own merit.

The critics thought this film was terrible and I usually disagree with them, but not this time.  All the Christians I have met, save a few, think it’s great because the Gospel is being preached.  Sorry, but the Gospel doesn’t need to be preached in a terrible, superficial way that will make anyone with half-a-brain wish they wouldn’t have wasted their money to see your movies.  The only good actor in this film was Sorbo, who played the atheist professor and he couldn’t save this movie.

Like Conroy said, “Dad, I think I just watched that terrible movie Valentines Day, remade with a Christian theme.”, which pretty much summed up this movie.  The movie is supposed to be about a young guy who takes on his Professor about whether or not God is dead, which it partially fulfills and that part of the movie was actually somewhat entertaining.  However, then you jump around to a liberal woman who is diagnosed with cancer, a Muslim girl who becomes a Christian and loses her family for listening to Billy Graham, a Pastor and his friend visiting from Africa who tells us over and over that “God is good all the time and all the time God is good.” while his car won’t start, the wife of the atheist Professor who happens to be a Christian, one of the guys from Duck Dynasty making a cameo appearance with his wife, which made no sense, and we witness the entire movie turn into a convoluted mess.

It then all ends up with the whole town attending a Newsboys concert with everyone living happily ever after.  Come on! This is Christian art and the best that Christian film makers have to offer our whacked out world?  Your audience is just other Christians because nobody wants to see a made for television Hallmark type movie on the Big Screen, other than Christians who want to feel good about themselves for supporting Jesus.  This movie was painful to watch and pretty much ridiculous.  They should have just focused on the conflict between the guy in college and the Professor and actually made a really interesting film, but they are obviously afraid of offending someone. And I obviously am not.

That is my review.  Now for all of my fellow Christians out there who are going to get mad at me as a believer in Jesus because I thought this movie pretty much sucked, I want to challenge you.  Go and watch The Book of Eli with real actors, a real story and a real Christian theme.  That was an amazing movie that the Christian community never got behind because it was “far too violent”.  Machine Gun Preacher that you can read the review of here was another great film that many Christians didn’t like because God doesn’t use machine guns to save lives.  The Passion of the Christ was a great film because Mel Gibson actually put some passion behind it with quality actors and was not willing to compromise and spit out Christian drivel.  Sure, he has some personal issues and needs Jesus in his life, but at least he made something real and Jesus wasn’t walking through the meadows with birds landing on his shoulders, like a princess in a Disney cartoon.

Since this is my movie blog, I have to add that Mel really screwed up on the veil of the Temple being ripped in two from top to bottom when Jesus died and he could have really demonstrated the significance of Jesus death.  The veil was around 60 feet in height, 30 feet in width and four inches thick and no man could have torn it in two from top to bottom, which is what happened to give us all entrance into the Holy of Holies through Christ’s death.  That’s amazing!  The crucifixion of Jesus by the Romans and the Jews (I’m not going to be politically correct here because they were both at fault) was brutal and Mel actually showed its brutality. Why do Christian film makers continue to avoid reality?  Do everything unto the glory of God is the call of the Christian, so stop making bad movies!  Make a movie that can compete with The Lord of the Rings or at the very least Veronica Mars that was crowd funded by their fan base and had real actors.

Where I live in Castle Rock, some Christians convinced the theater to bring God’s Not Dead for one night, so that they could support it.  Why? Why do you want to support poorly made films?  I don’t get it.  So you can text out “God’s Not Dead” to your Christian friends and get them to go see this movie?  This movie is bound for Netflix or Redbox and that’s where you should wait to see it.  If you actually sent a real message to these Christian “artists” to stop being pansies and afraid of offending people with the Bible, you would have far better results sharing the Gospel with the world.  Which is the ultimate mission of these Christian films.  Why didn’t the Christian film community or the Jewish community for that matter (the Bible is a Jewish book) sink their money into NOAH that is coming out, so that the prophet Noah would not be portrayed as the environmentalist prophet?  Instead we get to see “Noah the environmentalist” and God concerned about the world’s carbon footprint thousands of years ago before rain or SUV’s, instead of their sinful nature and incredible wickedness.  It’s comical.  Maybe God wiping out everything with a flood and a boat, then starting over because men were violent, wicked and totally sexually immoral was just too controversial for the Christian community?

Does anyone who makes these films actually read the Bible or do they just wear their “What Would Jesus Do” apparel?   Did you all miss that the Prophet Elijah killed all the Prophets of Baal by cutting them in pieces, after God smoked them out?  That would be an awesome film!  Did you skip over the ten plagues of Egypt because God didn’t look like a “Lover” when He wiped Egypt off the map and killed the first born children without mercy?  Does Job’s plight and the fact that God allowed Satan to kill his entire family not sit well with you because it’s “stinkin’ thinking”? Did you pull out of the Bible that David committed murder and adultery and had so much blood on his hands that God wouldn’t let him build the Temple?  What about how Solomon was a massive womanizer that ended up coming between his relationship with God?  Did you forget that Paul was put in prison, shipwrecked, stoned, beaten and he didn’t get to attend a Newsboys concert to solve all of his life’s problems?  Did you miss that Peter lied, Judas betrayed, John, James and the other Apostles argued and fought, Paul murdered and stoned Stephen, Jesus wept and sweat blood, begging God to take His cup from Him?  The fantasy land that the Christian community continues to portray in these “Christian” films is not even close to what the Bible teaches or looks anything like in reality?

The list goes on and on of amazing stories in the Bible.  Because those people were real, but Christian movies are not real.  They are all the same “Jesus will solve all your problems, so come and sing a song.“, which are just formula based films to appeal to a niche’ audience.  I think we should demand better.  Okay, I said what millions of other Christians are probably thinking, but may not be willing to say.

Go read your Bible and skip this movie or wait for it to hit the rental box.  I’ll be nice now and give it a Rental, but just barely.