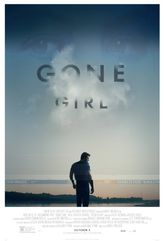 Becky and I went to see the film Gone Girl on Friday at the AMC theaters in Castle Rock, CO.  The Fandango website at Gone Girl describes the movie as follows…

The Review:  Our friend Devon that we run with read this book and she refused to tell us anything about it, but we definitely wanted to go and see it.  I’m not a big Ben Affleck fan at all, so when I found out he was in it, I wasn’t to thrilled about seeing it and I had low expectations.  It turned out that I was completely wrong about this movie.

This movie is done extremely well and is very disturbing.  There is a part in the film that is just over the top graphic and shocking that we did not expect and it was really terrible.  Probably the worst part of the film for us, but the rest of the film and the acting was superb.  Especially Rosamund Pike who plays “Amazing Amy” so well in this film and should win an Oscar for her performance in this movie.  It’s really that good.  If you’re wondering what this movie is about, just think Basic Instinct with Sharon Stone and that’s what this film is like.  It’s that crazy!

We had to go and watch Basic Instinct again after seeing this movie just to see how much it was like that movie.  It is a very original movie and extremely well done, but disturbing for sure.  I still don’t like Ben Affleck, but does a good job in this movie.