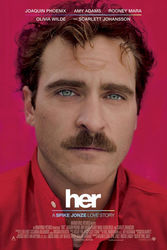 Becky and I went to see Her Friday night at the AMC theaters in Highlands Ranch, CO. The Moviefone website at Her describes the movie as follows…

“Joaquin Phoenix stars in Spike Jonze’s soulful sci-fi drama about a lonely writer who falls in love with his computer’s highly advanced operating system. Theodore Twombly (Phoenix) has built his career on expressing the emotions that others cannot.”

The Review:  Becky talked me into going and seeing this movie because it is up for so many awards.  She didn’t want to miss it when the Oscars come on later this year and I really don’t care if I miss a stupid film that the Academy likes for some reason.  I turned out to be right on this one.  This movie is about a guy who lives in the future.  He has a job writing hand written letters for an Internet company for other people, who want a letter written for them, which that in itself is strange.  However, that’s really nothing compared to what happens in this movie.  The guy is going through a divorce with his wife and has a problem meeting women and getting back into a relationship with a woman.  This is where it gets whacky.

He installs a new operating system based on artificial intelligence, that has a personality and is played by the voice of Scarlett Johansson.  He ends up falling in love with his computer and the whole movie is about his new relationship with his laptop.  When I came home and told our son Corban how stupid this movie was and how it was nominated for all these awards.  He said, “You went and saw a movie about Plankton and Karen on SpongeBob?” and then he started laughing.  Then I remembered that on the cartoon SpongeBob that the character Plankton has a wife who is his computer Karen.  Yes, they actually made a movie off of a SpongeBob character and we paid to go and see it!

This movie was a complete waste of time.  In fairness to Joaquin Phoenix, he was amazing in this movie because it was really just him.  Much like the movie Gravity that really just had Sandra Bullock playing the main character and nobody to play against, he was amazing as an actor.  It’s just too bad that the movie was a waste of time.  We can’t recommend seeing this movie, unless you really want to waste some time.