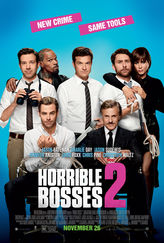 “Jason Bateman, Jason Sudeikis, and Charlie Day return for more employee revenge in this follow-up to the 2011 comedy. Sean Anders directs from a script by Anders and Jonn Morris. Having narrowly avoided prison following the antics of the previous film, Nick (Bateman), Kurt (Sudeikis), and Dale (Day) decide to go into business for themselves. When their breakthrough product, the Shower Buddy, catches the attention of a wealthy entrepreneur named Bert Hanson (Christoph Waltz) who offers to bankroll their initial production run, the eager inventors quickly move into manufacturing. Proudly filling Hanson’s initial order before the deadline, they decide to surprise their key investor with the good news, only to get a nasty surprise: A shrewd businessman with a serious lack of ethics, Hanson announces that he is cancelling the deal…”

The Review: This is the second installment of the first movie Horrible Bosses that was actually pretty funny.  The second time around it wasn’t nearly as funny as the first flick and was pretty crude most of the time.  The characters are still funny, but it’s almost like the exact same movie re-written with the characters in a different setting.  Much like watching a sitcom on television where they have another episode instead of a completely different movie.

Horrible Bosses 2 isn’t a terrible film, but it is pretty raunchy at times so be prepared for that aspect of the film.  There are quite a few good laughs and the story does have a couple of plot twists that make it entertaining.  The problem though with sequels is that you often compare them to the first one and the first film was definitely better than the second installment.

If you liked the first one you will probably like this one too, but otherwise you are better off waiting for the rental and watching the first one instead until this comes out at Redbox or on Netflix.