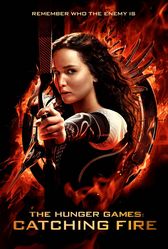 Becky and I went to see a the new Hunger Games movie a few weeks ago at the AMC Theaters in Highlands Ranch, CO with our kids.  The Fandango website at The Hunger Games: Catching Fire describes the movie as follows…

‘‘THE HUNGER GAMES: CATCHING FIRE begins as Katniss Everdeen has returned home safe after winning the 74th Annual Hunger Games along with fellow tribute Peeta Mellark. Winning means that they must turn around and leave their family and close friends, embarking on a “Victor’s Tour” of the districts. Along the way Katniss senses that a rebellion is simmering, but the Capitol is still very much in control as President Snow prepares the 75th Annual Hunger Games (The Quarter Quell) – a competition that could change Panem forever...”

The Review:  The second movie in The Hunger Games trilogy was much better than the first film.  I didn’t really like the first flick, but I did think that this one was much better.  I thought they did a much better job of getting the audience more emotionally connected with the characters in the film.  The conflict between good and evil in this movie is very obvious.  You can see how wicked people can become when the value of human life is diminished.  Although this movie is far fetched, it’s believable because of the corruption of man’s fallen nature.

The characters were well done in this movie, but the scenes are pretty graphic and it is disturbing to see young people playing a game of death to kill each other.  However, it is trying to make a point about what people will do when they are putting in desperate situations and forced to survive.  The acting is good and the main character is without a doubt the star of the film.

We all liked the film and thought it was worth the price of admission.  If you’re a huge fan of the book series, then you should really like this movie.  We liked it and we didn’t read the books, except for Conroy who did.