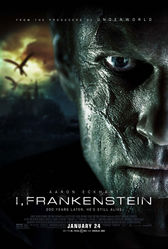 My son Conroy and I went to see I Frankenstein tonight at the Regal Cinemas in Lone Tree, CO. The Fandango website at I Frankenstein describes the movie as follows…

“Set in a dystopic present where vigilant gargoyles and ferocious demons rage in a battle for ultimate power, Victor Frankenstein’s creation Adam (Aaron Eckhart) finds himself caught in the middle as both sides race to discover the secret to his immortality. From the creators of the hit supernatural saga, UNDERWORLD, comes the action thriller I, FRANKENSTEIN, written for the screen and directed by Stuart Beattie based on the graphic novel “I, Frankenstein” by Kevin Grevioux...”

The Review:  I couldn’t talk Corban into seeing this movie with us because he thought that it looked stupid.  It turned out that he was right and we should have listened to him.  This movie had so many problems that it’s not even funny.  As Conroy said, “They should have rules that when a movie is this bad it can’t make it to the theaters.”, but apparently a few people really liked it.  Why I do not know?  It’s a movie about the classic Frankenstein monster who ends up in the middle of a war between demons and gargoyles.  The demons looked like something in a made for t.v. movie and the gargoyles looked ridiculous as well, but the gargoyles were the good guys for some reason.  They were named after angels like Gabriel with a reference to Michael and the whole movie was based on a terrible script.

Other than the characters looking low budget, with the exception of Frankenstein played by Aaron Eckhart, the special effects were not bad.  The script was horrible, the directing was miserable and the acting was actually good.  Conroy and I were bored and almost left the movie because it was so painful to watch.  The story was just way too lame and it wasn’t worth our time to see this movie.  It was definitely a don’t bother.